Located only 3 hours by car from Athens and below ancient Delphi, Galaxidi is a quiet mainland destination with the air of a distant, romantic island.

When you arrive in Galaxidi, the first thing that strikes you is the quiet. The road into this picturesque coastal village at the foot of Mount Parnassos leads you to Nikolaos Mamas Square – named after a sea captain and local benefactor – and the main port.

The fresh sea breeze, the cafes and tavernas lined up in a row, the fishing boats and yachts tied up in the marina, the people strolling on Pera Panta Hill and the beautifully renovated stately homes – once the residences of respected sea captains – comprise a setting that is reminiscent of the castle town of Nafplio in the Peloponnese, but with a more tranquil and less commercialized character. I remember it being like that ever since I was a child.

Walking up main Iroon Street, I steal a peek through the odd gate to admire pretty, colorfully paved courtyards, while soft music emanates from one of the neoclassical homes along the strip. I push aside my envy of the people who get to live in such beautiful homes and make my way to the Nautical Museum of Galaxidi. This museum, although small, has a respectable collection of antique weapons and stamps, as well as artifacts salvaged from wrecks, and serves as an excellent introduction to Galaxidi.

In the same neighborhood, which is one of the oldest quarters of the village, the Church of Aghios Nikolaos boasts an exquisite iconostasis dedicated to the church’s namesake, the patron saint of sailors. On the same road, another church – that of Aghia Paraskevi, features something rare for a Christian temple: a depiction of the zodiac calendar on its marble floor. 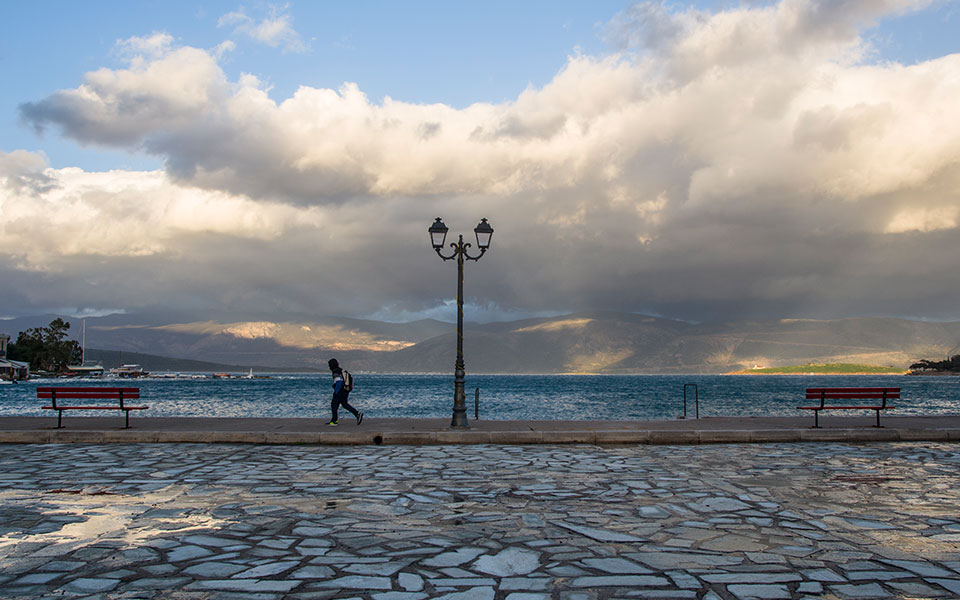 Once one of Greece’s busiest and wealthiest ports and shipyards, Galaxidi entered a period of decline in the early 20th century after failing to make the technological leap from sails to steam. Yet, despite the hard times it experienced as a result, it managed to retain its character, remaining a destination steeped in the history and elegance of its nautical traditions. It was listed for preservation in 1978 and is today a protected heritage site.

In recent decades it has also become a tourist and yachting destination, although its development has remained relatively low-key.

Nicole is an Australian doctor on her fourth visit to Galaxidi.

“You become enraptured with its sense of beauty and calm,” she says. A group of French and German tourists standing nearby and enjoying the tranquillity appear to agree. Most visitors to the area are Europeans; many combine a trip to Galaxidi with visits to Ancient Delphi just a few kilometers away up the mountain.

I head back toward the port for a bite to eat, and as I walk down cobbled Aghios Nikolaos Street I am invited for an afternoon coffee with the owner of the very home I had noticed earlier with the music. Roxani Limniou shows me around her beautifully renovated home with its air of a charming, bygone era. She points out photographs of ancestors, pretty needlework and the window frames that were painted by her husband, Aris. 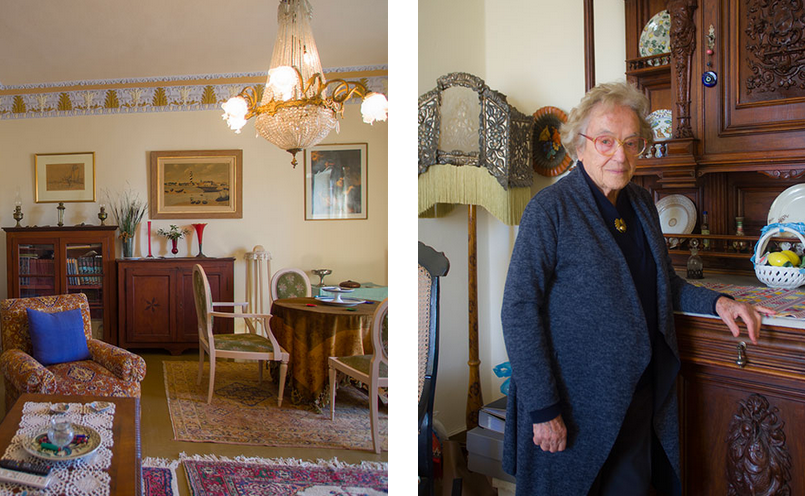 Many of the homes in Galaxidi once belonged to wealthy sea captains and retain an air of old-world elegance.

Nearby, in another splendid home, Stella Sendouka has prepared an orange cake and offers me a slice. While I’m not suggesting that you go around knocking on random doors if you visit Galaxidi, if the opportunity arises to visit one of its renovated stately homes, do not pass it up.

Galaxidi’s sailors traditionally treated the floors of their homes with the paint that was left over after they had painted their boats. Most of the old homes are two stories high, and the top floor was usually arranged in an open-plan design to make room for sewing and repairing ship sails.

In the afternoon I decided to take a bicycle ride to Chirolakas, Galaxidi’s second harbor, named after the sailors’ widows (“chires”). Rodoula Stathaki-Koumari is a scholar of local history and folklore as well as the owner of one of the neighborhood’s imposing houses. She regales me with tales about the village and points out some interesting landmarks in the area, such as a home built on the walls of Chaleum, as Galaxidi was known in antiquity. 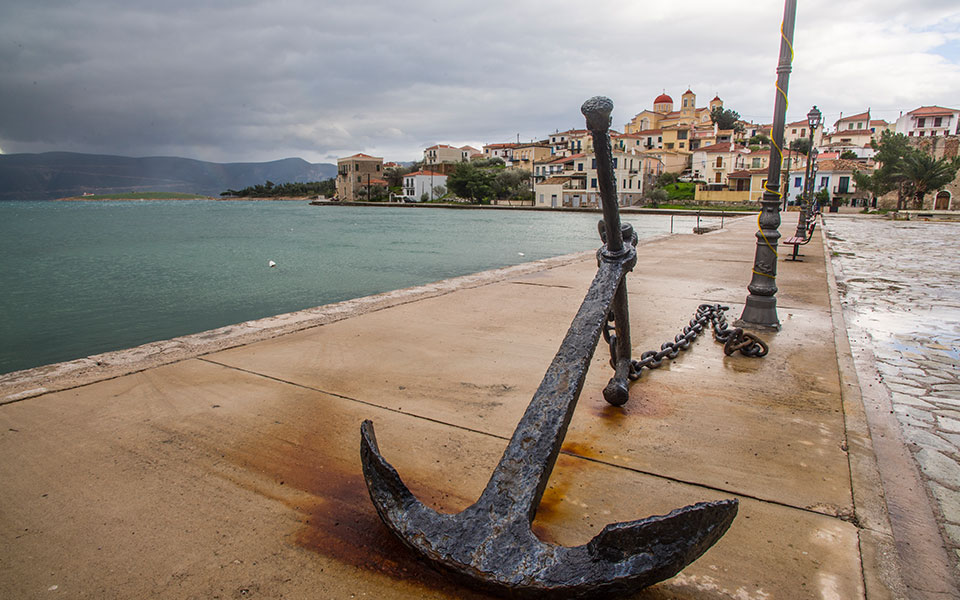 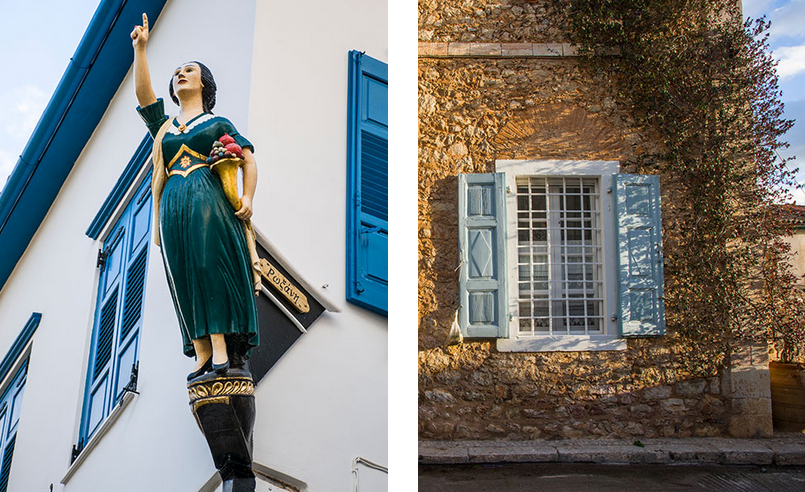 To really get a feel of Chirolakas, take a break at Liotrivi, a cafe-restaurant located in a refurbished building that once housed an olive press. Sitting there, by the sea, sipping a coffee or enjoying a meal, you really feel as though you are on an island, not on mainland Greece.

“Until 1963, when the road joining Itea to Nafpaktos was completed, Galaxidi was quiet and picturesque because it was connected mainly by sea routes. So, without being an island, it had an island atmosphere and its own very distinct character,” writes Stathaki-Koumari in one of her books. 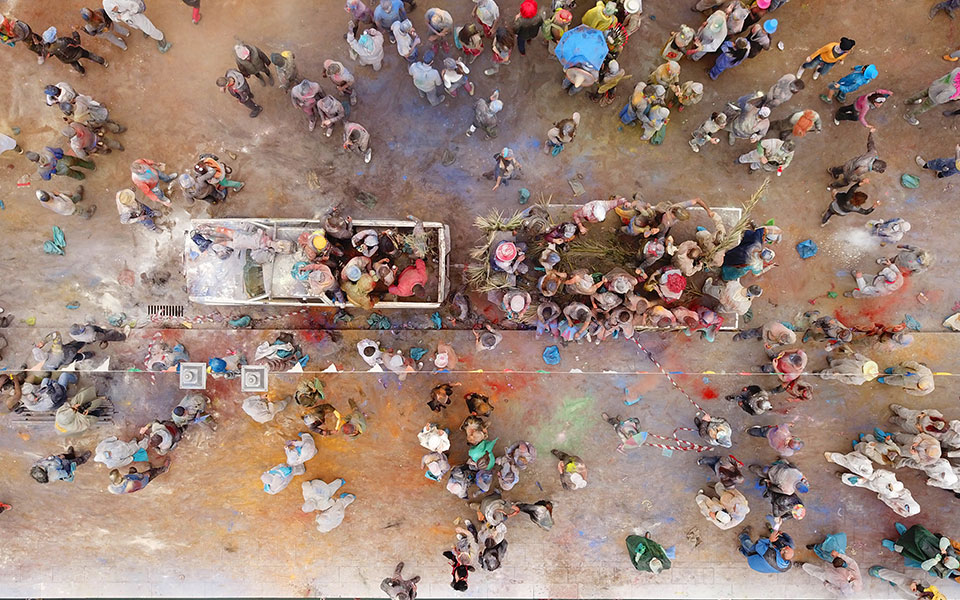 On the first day of Lent, known in Greece as Clean Monday, chaos and mayhem reign through the streets of this otherwise quiet village. This is the “alevromoutzouroma,” or “flour war” an old custom of unknown provenance whereby revelers throw colored flour at each other and blacken their faces with coal.

When night falls, there is a decent selection of places to eat and to enjoy a drink, mainly around the port. If you’re looking for more excitement in the winter, Arachova, one of Greece’s most popular ski and winter resort villages, is just a few kilometers away, above Delphi. Hedonistic partying just doesn’t fit Galaxidi’s quiet profile. It is much more suited to an early morning stroll on Pera Panta Hill, with the sea on one side and a pine forest on the other. Or even better, head out for a sailing trip lasting a day or two.

You will find plenty to take back home in one of the several shops around Galaxidi, but this isn’t the place to go on an enormous shopping spree. The best souvenir would probably be a jar of homemade marmalade, which is served at almost every hotel and bed-and-breakfast in the area. 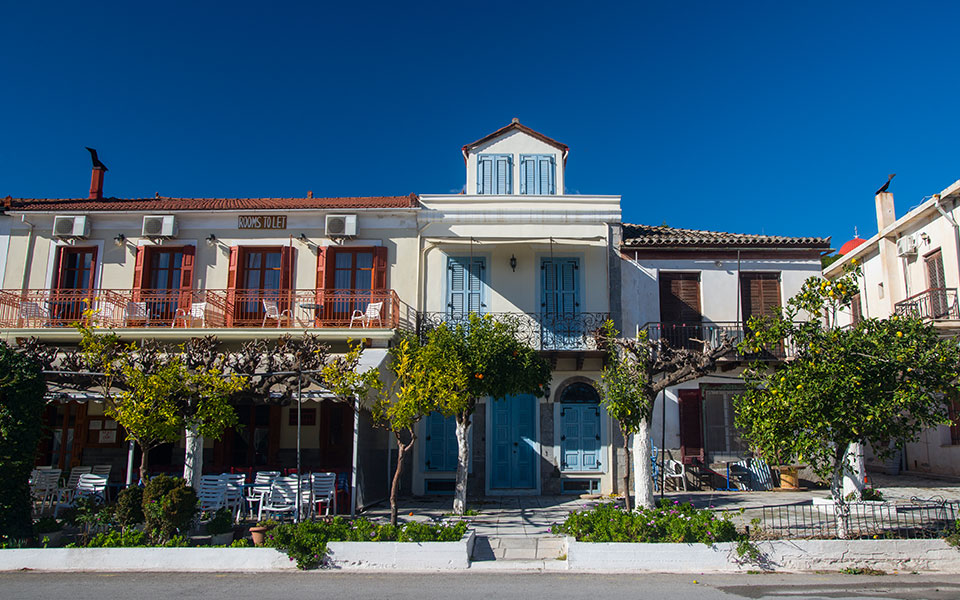 The practice of serving a lavish breakfast making use of fresh Greek agricultural products was first started at the Ganimede by its first owner, an Italian named Bruno. Since then it has become a staple of most of the village’s hotels and guesthouses, which are usually small and family-run. (At Ganimede the tradition lives on in the form of Chrissoula’s Greek breakfast!) In fact, I doubt you’ll find a hotel that does not serve homemade marmalades, spoon sweets, pies and cakes.

Even if you don’t have a lot of time on your hands, a weekend is enough to get to know Galaxidi and to recharge your batteries in a serene and beautiful setting. More than a fishing village, it has a rich heritage and a unique sense of identity that is quietly exuded rather than openly advertised. As the locals like to say, “it speaks with its silence.”

Getting there It takes about 3 hours to drive to Galaxidi from Athens either via Delphi or Desfina, the latter being a pretty if winding route along the coast. On average, budget about 30 euros for gas and tolls each way.

The recently renovated Ganimede (tel. 22650-41328, 6937-154567) has a rich and award-winning Greek breakfast served in the interior courtyard. Aside from the above recommendations there are many other charming guesthouses to discover. 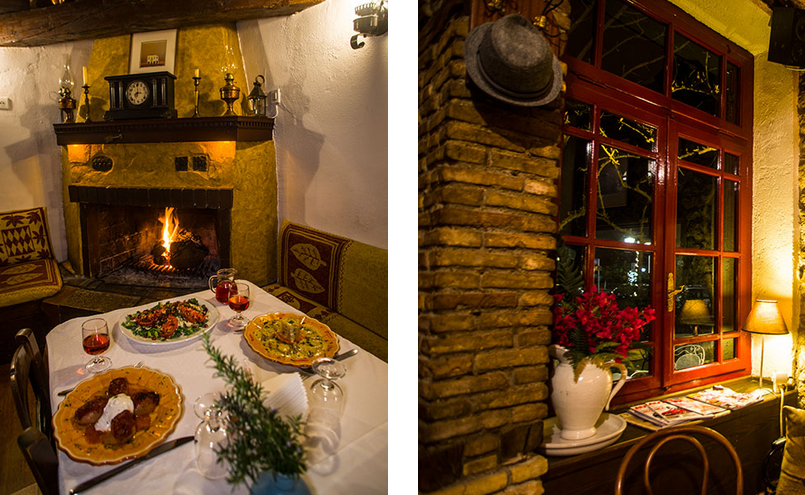 At Bebeli (tel. 22650-41677) try the local kelemia (stuffed onions) as well as other delicious slow-cooked and grilled dishes. For home-style cooking head to Albatros (tel. 2650-41677), a small establishment almost directly opposite the church of Aghios Nikolaos.

For coffees and drinks, listen to what your instincts and taste in music tell you. All of the cafe bars are located around Galaxidi’s two ports.

The Myth of Oedipus